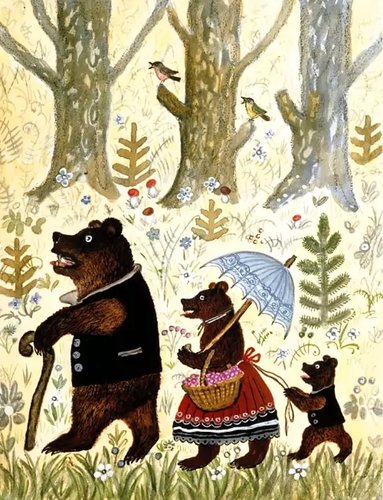 English
Russians
About children
About a bear
About Animals
Bedtime
About good and evil
For youngest children
For kids 3-5 years old
English folk tales, Russians folk tales - Goldilocks and The Three Bears read a fairy tale online on our website. You can also download story in different formats. Approximate reading time 6 min. Have fun!
Add to favorites

Goldilocks and The Three Bears story for kids to read

Once upon a time three bears lived in a nice little house in a great forest.

There was the Father Bear, the Mother Bear, and the Baby Bear.

They had each a bed to sleep in, a chair to sit on, and a bowl and spoon for eating milk or honey, which was their favourite food. 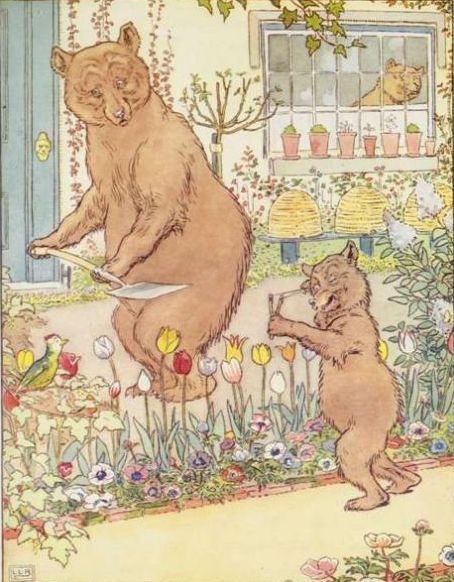 One morning the three bears resolved on taking a walk before breakfast; but before they went out, they poured their warm milk into their basins, that it might get cool by the time they came back.

When the milk was poured out, the three bears set out for a walk. 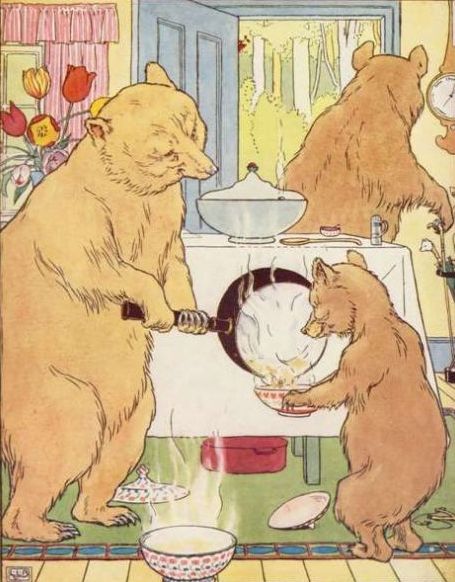 Mr. and Mrs. Bear walked arm-in-arm, and Baby ran by their side.

And so it was.

The sun shone brightly though it was low in the sky, and its rays glittered on the fine webs on the grass. The leaves shivered in the soft breeze; the wood-pigeon cooed; the lark sang loud enough to make himself hoarse; the sparrows chirped; the bee buzzed, and a yellow butterfly perched on great Bear’s nose.

“What a squeaky noise these creatures make!” said big Bear, as he brushed off the butterfly. “What a pity it is they have not our deep voices.”

“Yes,” said Mrs. Bear; “you have a much finer voice than the lark. I should like to hear him growl as you do.”

“Oh, my dear, you are too kind; my growl is nothing to the lion’s.”

And thus conversing, the bears walked on. 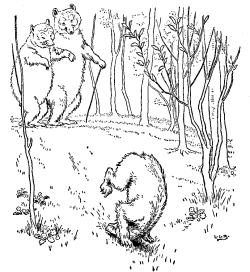 Now there lived in the same forest a sweet little girl, who was called Goldilocks. She was the Woodman’s daughter, and her hair looked just like sunbeams. She knew every tree in the greenwood, and every flower in it. She loved the birds, and liked to listen to their song; and everything in the wood loved Goldilocks. The trees bent down their lower branches to touch her glittering head as she passed; the birds sang sweeter as she glided by. The lark’s song in the sky was—

“Come up, come up, Goldilocks; here is your happy home.”

“Oh, you darling,” sang the blackbird; and Goldilocks laughed with glee, for she liked to be loved.

As to the butterflies, they flew after her, and rested on her hair, and tickled her cheeks; but she never tried to catch them.

She would not frighten or vex them for anything. She loved all the creatures, and that is why they loved her. Love makes love.

Dear little Goldilocks, she went on singing merrily through the greenwood, saying sometimes to herself—

“I wish I could sing as well as the lark!”

By-and-by Little Goldilocks reached the Bears’ house. She had never seen it before, and she wondered who lived there. A window was open, and Goldilocks peeped in. 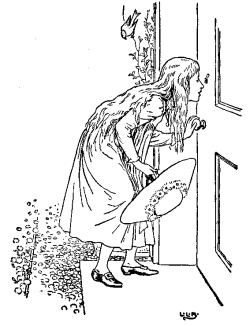 “Dear me,” thought the child, “whose house can it be! There is a table and three chairs, and three basins of hot milk, all steaming, and nobody to drink it. But I don’t see any work or books, or anything else. I think I will go in and see who lives here.”

So she tapped at the door, and cried, “Is any one at home?”

But there was no answer. Then Goldilocks stepped in very carefully, and looked about her.

She could not see any one, nor hear anybody snoring, so she walked into the Bears’ parlour.

There was a fire, which made the room cheerful, and the hot milk looked very inviting; it quite seemed to say, “Come and have some breakfast;” and the early spring air had made Goldilocks rather cold, and very hungry; so she sat down by the fire in the little Bear’s chair. It was too small for her, but she did not quite sit down at first.

In a moment she got up again, and went round the table and tasted the milk in all the bowls. Little Bear’s was the nicest, because it had sugar in it, and Goldilocks thought it was good. So she took the bowl and sat down again in Little Bear’s chair, took his spoon, and ate up all his milk. 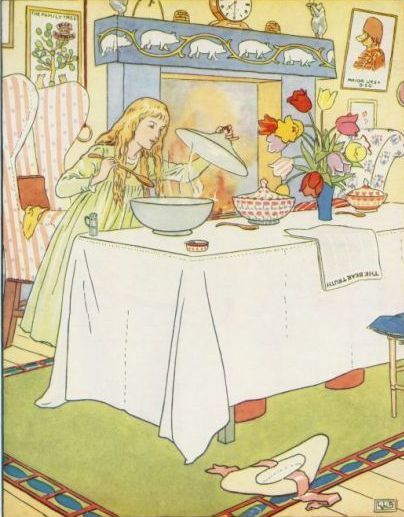 Now this was very wrong. A tiny bear is only a tiny bear; still, he has a right to keep his own things. But Goldilocks did not know any better. Unluckily, Baby Bear’s chair was, as we have said, too small for her; she broke the seat and fell through, basin and all. 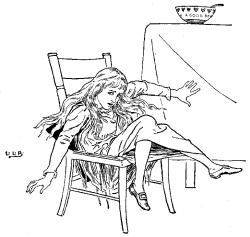 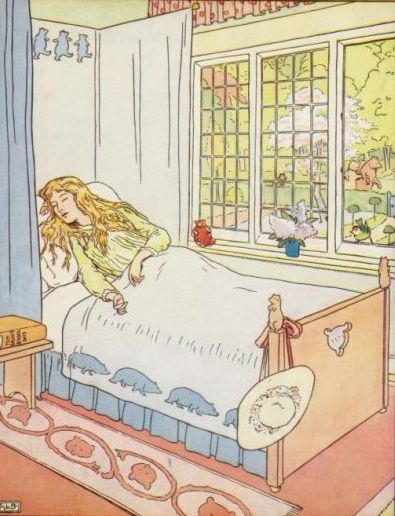 By-and-by the bears came home. Baby Bear saw that his chair was broken and thrown down, and he cried in a very squeaky voice

“Somebody has been here!” 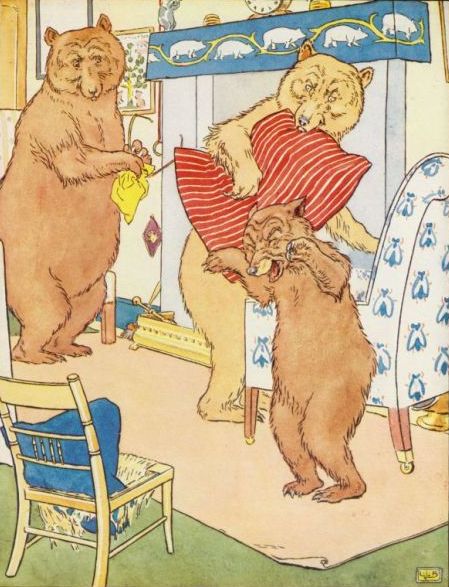 “SOMEBODY HAS BEEN HERE;” 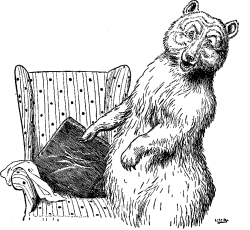 “Somebody has been here.” 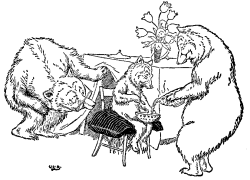 Then they went to the table and looked at their breakfasts, and Father Bear growled, “WHO HAS TOUCHED MY BOWL?” 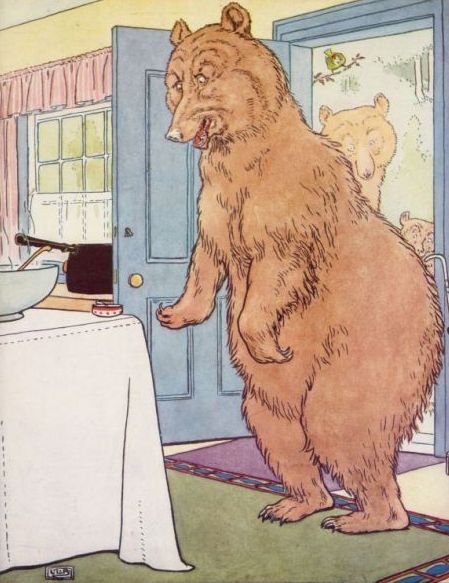 And Mother Bear growled, “Who has touched my bowl?”

And Tiny Bear squeaked, “Somebody has broken mine!”

And then Tiny Bear began to cry, for he was very fond of his own bowl and his own chair; and, besides, he was very hungry after his long walk in the forest. 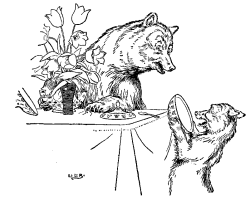 It really did seem a shame. Then the three bears thought they would go over their house, to see who had been in it, and to try if they could find the thief. 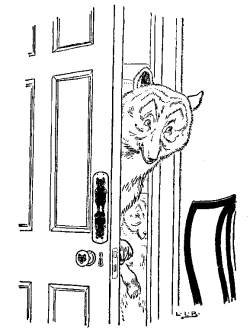 They went upstairs to their bedroom, which was over their other room, and as soon as they saw the tumbled beds Father Bear growled,

“WHO HAS BEEN LYING ON MY BED?” 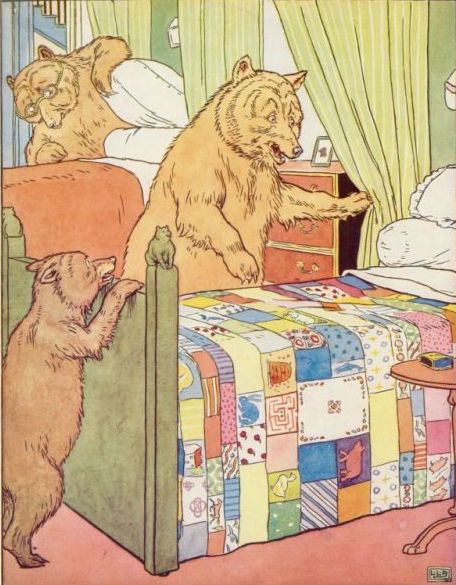 “Who has been lying on my bed?”

And Tiny Bear squeaked out,

“Oh! here is a little girl in my bed; and it must be she who has eaten my breakfast and broken my chair.” 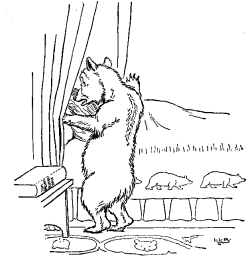 And Mother Bear growled, “Let us eat her up;” 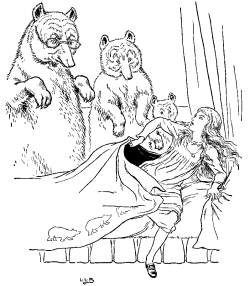 The noise they made woke Goldilocks, and you may imagine how frightened she was when she saw the three bears. She started out of bed, and jumped at once out of the window.

The bears rushed after her, and Father Bear caught her golden hair in his teeth, but she left a lock behind, and still ran on. Then the three bears all jumped out after her, but they fell one on the top of the other and rolled over and over, and while they were picking themselves up, little Goldilocks ran home, and they were not able to catch her. 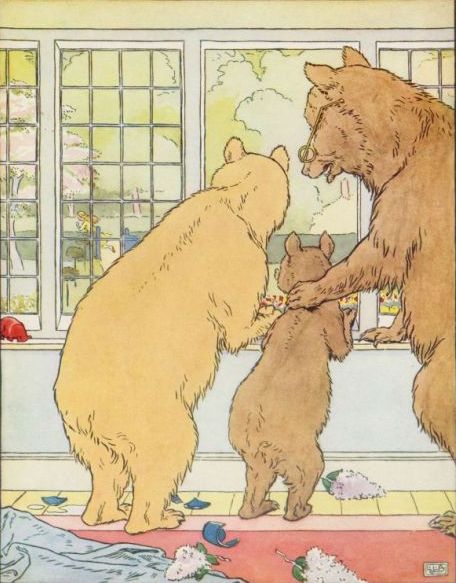 But I do not think she had acted rightly (though she did not deserve to be eaten up); it was very wrong to break little Bear’s chair and eat his milk, and I think Goldilocks will have to take great care to keep out of the reach of the Three Bears. 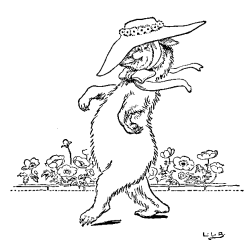 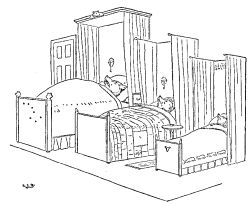