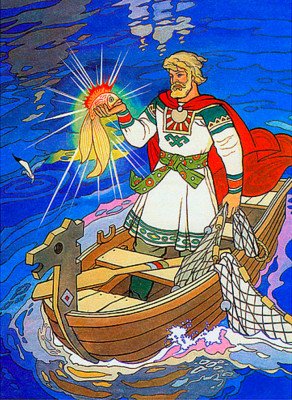 Russians
For pre-schoolers
For pupils and schoolchildren
For kids 8-9 years old
For kids 6-7 years old
Russians folk tales - Sadko and The Sea King's Daughter read a fairy tale online on our website. You can also download story in different formats. Approximate reading time 20 min. Have fun!
Add to favorites

Sadko and The Sea King's Daughter story for kids to read

In the north of Holy Russia lies the mighty and glorious town of Novgorod, known to all as Lord Novgorod the Great. And once there lived in great Novgorod a bard, a musician of some repute, by name: Sadko. He had little in the way of gold, and to support himself he made the rounds of the noble feasts and banquets, entrancing and delighting everyone, whether prince or boyar, merchant or peasant, with his marvelous skill on the gusli and his golden voice and his skill at weaving words and music into mighty visions of the exploits of Russian folk. He was always in demand and he looked forward to a day when he might have saved enough money to allow him to sing and play simly for pleasure rather than sustenance.

Alas! Misfortune strikes us all, and so it struck Sadko. A day arrived when no one called for his presence, and he did not sing that day, neither did he receive any payment for his music. A second day passed without feast or banquet calling for his songs, and then a third. His money pouch was quicky being depleted, and his plans for an easier life being thwarted.

Sighing with regret, Sadko journeyed down to the shores of Lake Ilmen and sat upon a rock by the waters. He began to pluck the strings of his faithful gusli, and to sing a song of lament. All the day, from just after the rising of the great, red sun until late in the afternoon as that same sun sank toward the western hills, Sadko played and sang. First a lament, then a mighty ballad of a great bogatyr, then a love song, then another lament, and so on through the passing hours. Just as evening fell, as he finished another song, there was a disturbance in the waters of the lake. Suddenly the waves began to swirl and a great noise of thunder rose from the depths of the waters. Great clouds of sand darkened the lake still further. Sadko, quite frightened, tucked his gusli under his arm and fled back to the town of Novgorod.

The dark night passed and once again the sun rose into the heavens, but once again no invitation to perform came to Sadko. Being forced into idleness is tremendously wearing, so the bard went once again to the lovely shores of Lake Ilmen, sat upon the rocks by the blue waters, and began to sing. This day he sang new songs, songs he was only then composing in his mind. He sang to the glory of Novgorod, and to the prince, and he sang to the glory of Christ our Lord and to His Mother, the Theotokos. He sang new tales of Russian bogatyri and of magical beings who played tricks on unwary travelers. All the day long he played, and as it grew on toward dusk, there was a disturbance in the waters of the lake. Suddenly the waves began to swirl and a great noise of thunder rose from the depths of the waters. Great clouds of sand darkened the lake still further. Sadko, once more afraid, returned swiftly back to Novgorod.

On the third morning the door remained undarkened by anyone inviting Sadko to play at feasting, and so for the third time he went again to the stones on the shore of Lake Ilmen and sat in the warm sun and played his gusli while he sang sweet songs. As on the previous two days, at dusk the waves began to swirl and a great noise of thunder rose from the depths of the waters. Great clouds of sand darkened the lake still further. This time, however, Sadko remained in his place atop a great boulder and continued to sing and to play. He played as the night came on, a long while or a short while, it matters not a bit, for all of a sudden the waves grew high and crashed at the baseof Sadko's stone, and the thunderous roar of the waters grew louder than ever before. Then, before the terrified bard could move a muscle, the waters sank back into quietude and parted! Up from the depths of Lake Ilmen strode the mighty form of the King of the Blue Seas!

"Many thanks to you, O Sadko the Bard of Novgorod," cried the King, and his voice was like the crashing of waves and rushing of waters. "For three days now you have greatly entertained us, for I have been holding feastday in my palace beneath Lake Ilmen. All have been bewitched by the golden tones of your voice, the dexterity of your fingers on the gusli, and the wit and wisdom of your words. Would that we could reward you adequately, but I know not how I should... But wait! Go now to your home in Novgorod, O Sadko, and on the morrow you shall be called to perform at the banquet of the wealthiest merchant of the city. Everyone will be present, from the veche, to the prince, to the merchants. As always happens with men, when they have eaten and drunk all they desire, they will begin to boast, and oh, such boasting as would make a bard's ears tingle with ideas for rollicking songs! One will brag of his great wealth, another of his noble steed, yet another of his great might and prowess in battle, and even more of his youth. Wisdom will boast of his elderly father and mother, foolishness will boast of his sweet young wife. But you, Sadko the Bard, will make a boast to shame theirs! Say to them: 'I, Sadko the Bard, knowthat dwelling in Lake Ilmen are fish with fins of pure gold!" Those rich (and ignorant) merchants of Novgorod will delight t ridiculing your words, and they will contradict you and deny that such fish are in Lake Ilmen. Thereupon you must wager with them, setting your turbulent head against all their shops and precious goods. When they accept (and they will, for foolish men always do), take a net of silk and come here, casting the net into the lake three times. Whenyou do this, I will send you each time a fishwith fins of pure gold. And in this way you will win markets full of shops and become Sadko the richest merchant of Novgorod, and you will be able to play and sing solely for pleasure rather than sustenance!"

Sadko returned to Novgorod, sighing over the tricks of a head left to sit too long in the heat of the sun. But lo and behold! on the morrow when he went forth from his bed he was greeted by the chamberlain of the richest merchant in town, and invited to grace a great feast with song and story. And everything happened just as the King of the Blue Sea had predicted.

When everyone present, the veche, the prince, and the rich merchants, had eaten and drunk all they desired, they began to boast and oh! the braggarts told tales that would make fodder for many fine witticisms of Sadko the Bard for long years to come! One boasted of his great riches and endless treasures, another of his noble steed descended from the most ancient and worthy bloodlines, yet another of his knightly bearing on the field of battle and his prowess a arms, while a wise man boasted of his elderly and saintly father and mother, and a fool bragged of his sweet young wife. All the while, Sadko sat and spoke not a word. When the feasters had finished their bragging, the host of the banquet turned to the silent and smiling Sadko and asked him whether he had nothing to boast of. Laying aside his gusli, Sadko arose and said:

"Aie me! O noble merchants of Novgorod, o mighty prince, o all-powerful veche, what could a poor man such as I, Sadko the Bard, have to match against your glorious boasts? I have no goden treasure, I have no sweet wife. My music is a gift of God and not mine to boast of. I know of only one thing whereof I could boast, for I alone know that in Lake Ilmen swim fish with fins of gold!"

At first there was silence, then a snicker, and finally the merchants of Novgorod roared with laughter! Then they began to argue and contend with the bard, asserting that no such fish existed in the lake, or even in the wide world.

"Ah, if I were rich, like you," lamented Sadko, "I would be able to wager much gold on the truth of my words. But alas! I have nothing but my own turbulent head to offer as stakes."

"We gladly accept your wager, Sadko!" chuckled the over-confident merchants. "We say no fish with fins of gold are in Lake Ilmen, and we shall wager all of our shops in the Great Market and all of their fine goods against your turbulent head!"

Then Sadko took a net of silk and went straightaway to the shores of Lake Ilmen and cast it into the waters. When he drew it out, there lay within it a tiny fish with fins of pure gold. The merchants were amazed, but Sadko did as the King of the Blue Sea had bidden him and cast the net into the lake twice more, and each time he drew forth a tiny fish with fins of pure gold. Without argument and seeing that the bard had spoken truth (for the merchants of Novgorod prided themselves on their honesty), they turned over to Sadko the shops in the Great market and all their fine goods. Thus did Sadko the Bard become one of the richest merchants in the glorious town of Novgorod, and no more sang for sustenance, but rather for pleasure.