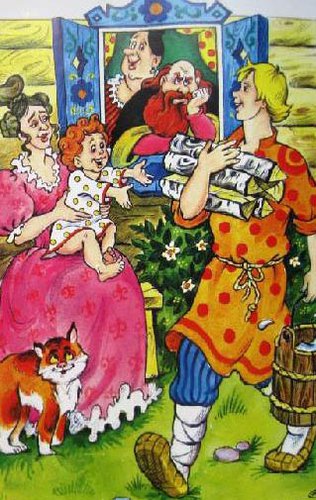 Author: Alexander Pushkin
Download fairy tale The Tale of the Priest and of his Workman Balda in epub, pdf, fb2 format

Russians
About Devils/Demons/Impurities
About Laziness
For pupils and schoolchildren
Poems
For kids 8-9 years old
For kids 6-7 years old
Alexander Pushkin - The Tale of the Priest and of his Workman Balda read a fairy tale online on our website. You can also download story in different formats. Approximate reading time 9 min. Have fun!
Add to favorites

Was a pope, who is dead.
He went out a-shopping one day
To look for some wares on the way;
And he came on Balda, who was there.
Who was going he knew not where,
And who said, “Why so early abroad, old sire?
And what dost require?”
He replied, “For a workman I look,
To be stableman, carpenter, cook;
But where to procure
Such a servant? — a cheap one, be sure!”
Says Balda, “I will come as thy servant.
I’ll be spendid, and punctual, and fervent;
And my pay for the year is — three raps on thy head;
Only, give me boiled wheat when I’m fed.”
Then he pondered, that pope;
Scratched his poll, put his hope
In his luck, in the Russian Perhaps.
“There are raps,” he bethought him, “and raps.”
And he said to Balda, “Let it be so;
There is profit for thee and for me so;
Go and live in my yard.
And see that thou work for me nimbly and hard.”

And he lives with the pope, docs Balda,
And he sleeps on straw pallet; but ah!
He gobbles like four men.
Yet he labors like seven or more men.
The sun is not up, but the work simply races;
The strip is all ploughed, and the nag in the traces;
All is bought and prepared, and the stove is well heated;
And Balda bakes the egg and he shells it — they cat it;
And the popess heaps praise on Balda,
And the daughter just pines for Balda, and is sad;
And the little pope calls him paper.
And he boils up the gruel, and dandles the lad.

But only the pope never blesses
Balda with his love and caresses.
For he thinks all the while of the reckoning;
Time flies, and the hour of repayment is beckoning!
And scarce can he eat, drink, or sleep, for, alack,
Already he feels on his forehead the crack.
So he makes a clean breast to the poppess
And he asks where the last rag of hope is.
Now the woman is keen and quick-witted
And for any old trickery fitted.
And she says, “I have found us, my master,
A way to escape the disaster:
Some impossible job to Balda now allot.
And command it be done to the very last jot;
So thy forehead will never be punished, I say,
And thou never shalt pay him, but send him away.”

Then the heart of the pope is more cheerful
And his looks at Balda are less fearful,
And he calls him: “Come here to me, do,
Balda, my good workman and true!
Now listen: some devils have said
They will pay me a rent every year till I'm dead.
The income is all of the best; but arrears
Have been due from those devils for three mortal years.
So, when thou hast stuffed thyself full with the wheat.
Collect from those devils my quit-rent, complete.”

It is idle to jar with the pope; so he,
Balda, goes out and sits by the sea.
And there to twisting a rope he sets
And its further end in the sea he wets.
And an ancient fiend from the sea comes out:
“Balda, why sneakest thou hereabout?”
— “I mean with the rope the sea to wrinkle
And your cursed race to cramp and crinkle.”
And the ancient then is grieved in mind:
“Oh why, oh why, art thou thus unkind?”
— “Are ye asking why? and have not you
Forgotten the time when the rent was due?
But now, you dogs, we shall have our joke,
And you soon will find in your wheel a spoke.”
— “O dear Balda, let the sea stop wrinkling.
And all the rent is thine in a twinkling.
I will send thee my grandson—wait awhile.”
— “He is easy enough,” thinks Balda, “to beguile!”

Then the messenger imp from the ocean darted.
And to mew like a famished kitten started.
“Good morrow, Balda, my dear muzhik!
Now tell me, what is it, this rent you seek?
We never heard of your rent—that’s flat;
Why, we devils have never had worries like that!
Yet take it, no matter! — on this condition,
For such is the judgment of our commission,
So that no grievance hereafter be —
That each of us run right round the sea.
And the quickest shall have the whole of the tax.
Our folk, meanwhile, have made ready their sacks.”

Then said Balda, and he laughed so silly,
“Is this, my friend, thy device so wily?
Shall the likes of thee in rivalry
Contend with the great Balda, with me?
Art thou the foe who is sent to face me?
My little brother shall here replace me.”

Then goes Balda to the nearest copse;
Catches two hares, that in sack he pops.
And returns to the sea once more.
To the devilkin by the shore.
And he grips one hare by the ear;
“Thou shalt dance to our own balalaika, my dear.
Thou, devilkin, art but young and frail;
Dost thou strive with me? thou wilt only fail;
It is time and labor lost for thee;
Outstrip my brother, and thou shalt sec!
So, one, two, three, and away — now race him!”

Then off goes the imp, and the hare to chase him.
And the imp by the seashore coasted,
But the hare to the forest posted.
Now the imp has circled the seas about.
And he flies in panting, his tongue lolls out.
And his snout turns up, and he’s thoroughly wet,
With his paw he towels away the sweat.
And he thinks he has settled Balda. But there!
Balda is stroking the brother-hare.
And repeating, “My own, my deary.
Now rest, my poor brother, for thou art weary!’
Then the imp of a heap was struck,
And tamely his tail through his legs he stuck;
At the brother-hare he glanced askew,
Said, “Wait, I will fetch the rent for you.”
When he got to his grandad, “Too bad!” he said;
“Balda — the young one — got right ahead.”

Then the ancient fiend had a notion;
But Balda made a noise and commotion,
And the ocean was vexed,
And the waters were parted next,
And the imp slipt out: “’Tis enough, muzhik;
We will send to you all the rent you seek.
But listen; dost thou behold this stick?
Now, choose thou a mark, and take thy pick;
And the one who the stick can farthest shoot, he
Shall have the whole of the rent for booty.
Why dost thou wait? why standest cowed?
Dost thou fear to sprain thy wrist?” — “’Tis a cloud
Up there I await. I will toss thy stick up
Right in the cloud, and will start a kick-up
For you fiends!” And again he had won, had Balda,
And the terrified imp told his grandpapa.
And Balda again made the waters roar
And threatened the fiends with the rope once more;
And the imp popped up again; “Why dost fuss?
If thou wilt, thou shalt have all the rent from us.”

“Nay, nay,” says Balda,
“I think it is my turn, ha ha!
Little enemy, now the conditions to make,
And to set thee a riddle to crack.
Let us sec what thy strength is. Look there
At yonder gray marc:
I dare thee to lift her
And half a mile shift her.
So, carry that marc, and the rent is thine;
Hut carry her not, and the whole is mine.”
And the poor little imp then and there
Crawled under the mare,
And there he lay lugging her
And there he lay tugging her.
And he hoisted that marc for two paces; but falling
As he took the third, he dropped there sprawling.
Then says Balda, “What avails to try,
Thou fool of an imp, with us to vie?
For thou, in thy arms thou couldst not rear her,
But see, between my legs I’ll bear her.”
And he mounted the marc, and galloped a mile.
And the dust eddied up; but the imp meanwhile
Ran scared to his grandad, and told him then
How Balda was the winner again.

Then the devils, no help for it, rose and went
In a ring, and collected the whole of the rent.
And they loaded a sack
On Balda, who made off with a kind of a quack.
And the pope when he sees him
Just skips up and flees him
And hides in the rear of his wife
And straddles, in fear of his life.
But Balda hunts him out on the spot, and sec!
Hands over the rent, and demands his fee.

Then the pope, poor old chap.
Put his pate up. At Rap
Number One, up he flew
To the ceiling. At Rap Number Two
The pope, the poor wretch,
Lost the power of speech.
And at Rap Number Three he was battered,
And the old fellow’s wits, they were shattered.
But Balda, giving judgment, reproached him: “Too keen
Upon cheapness, my pope, thou has been!”